20th of April 2020. Inspection robot for carbon fiber parts set up in half a day 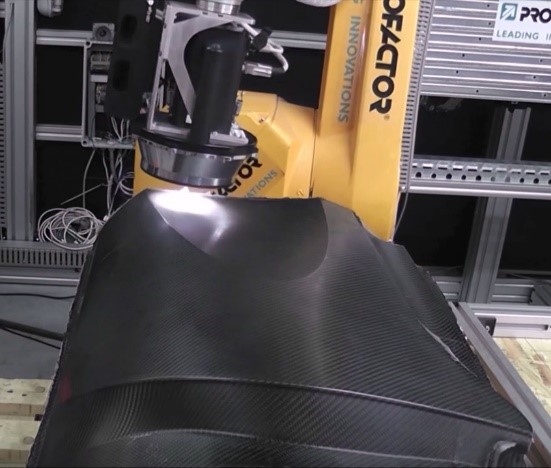 While observing all necessary pre-cautions that applied in April 2020 an additional test of the SPIRIT software framework could be conducted in the laboratory of Profactor. The tests included the inspection of a draped carbon fiber part with Profactor’s FScan sensor. The SPIRIT inline framework (including the coverage and motion planning) was used to perform a full surface scan and to detect deviations in fiber orientation and other surface defects, such as foreign objects. The efficiency of the framework was demonstrated by the fact that two quite different inspection tasks could be set up in less than half a day.

The SPIRIT project will be presented at the JEC fair in Paris at the Profactor booth in Hall 6 Booth 75. Update: due to Corona-virus the JEC fair has been postponed to 2021. 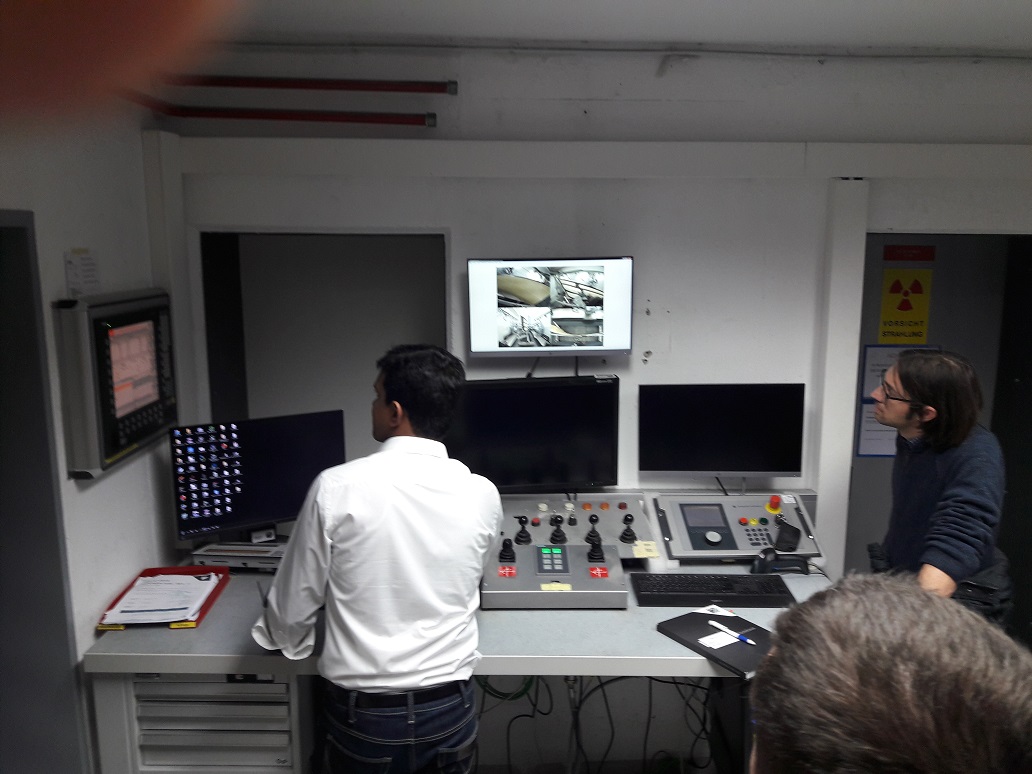 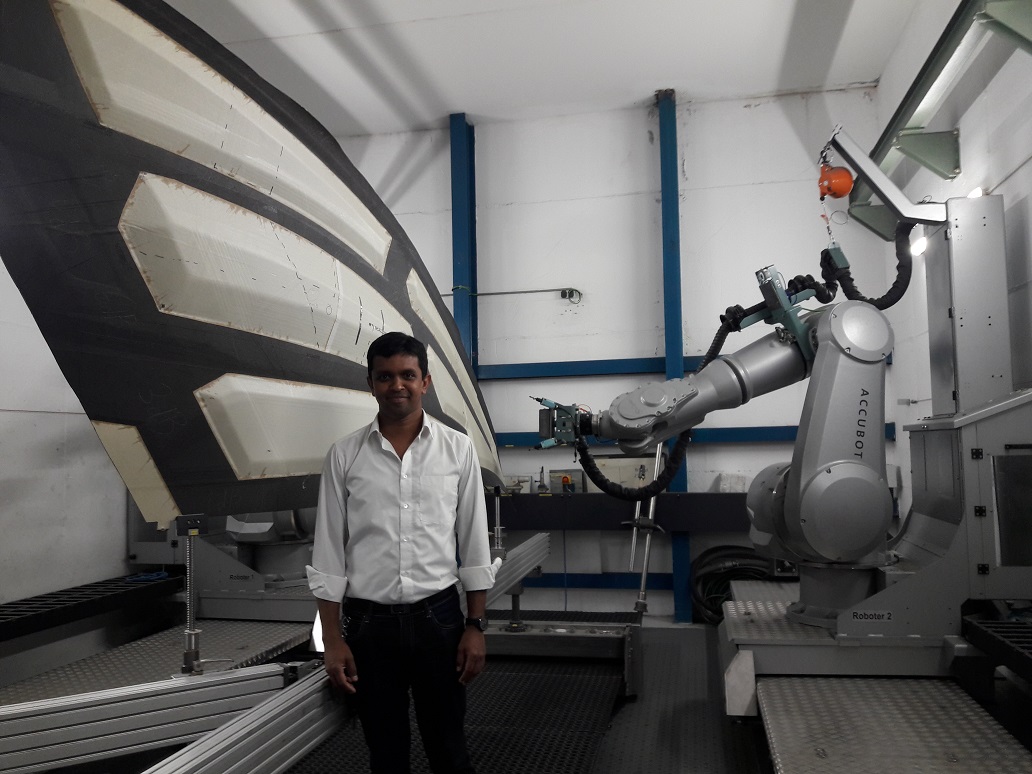 In February 2020 the consortium met at project partner FACC in Ried im Innkreis to assess the progress and to demonstrate the recent developments. For the demonstration a huge robotic system for the X-Ray inspection of large composite parts was used. It consists of two synchronized robots, one holding the X-Ray source and the other one the detector. A collision-free path was planned automatically for the inspection of the part and was demonstrated live during the meeting at FACC. Additional features have been added to merge the acquired images into one large, colored and textured model of the part. Furthermore a reactive alignment of the robot was integrated, by analysing the X-Ray image of the hexagonal structure of the honeycomb core. This alignment is used to reactively adjust the inspection process so that the honeycomb structure is always shown in an optimal way. 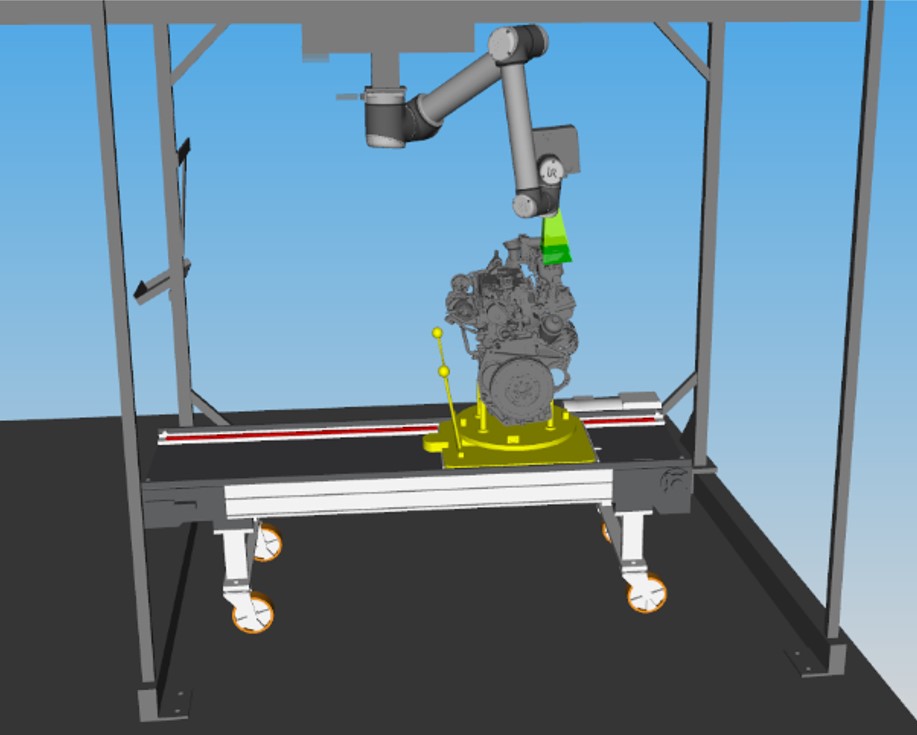 By the end of August the main part of the activities for path planning of the inspection were completed. Inspection paths for the robots have been calculated for all test cases based on their workcell and part models. During the evaluation a test was completed to check the time needed to set up an inspection task for a new type of part. Experiments showed that a user with average experience just needs 25 minutes to define an inspection path that fully covers the part and that can be executed on the robot. This was achieved using the enhanced workcell simulation software of partner IT+Robotics. 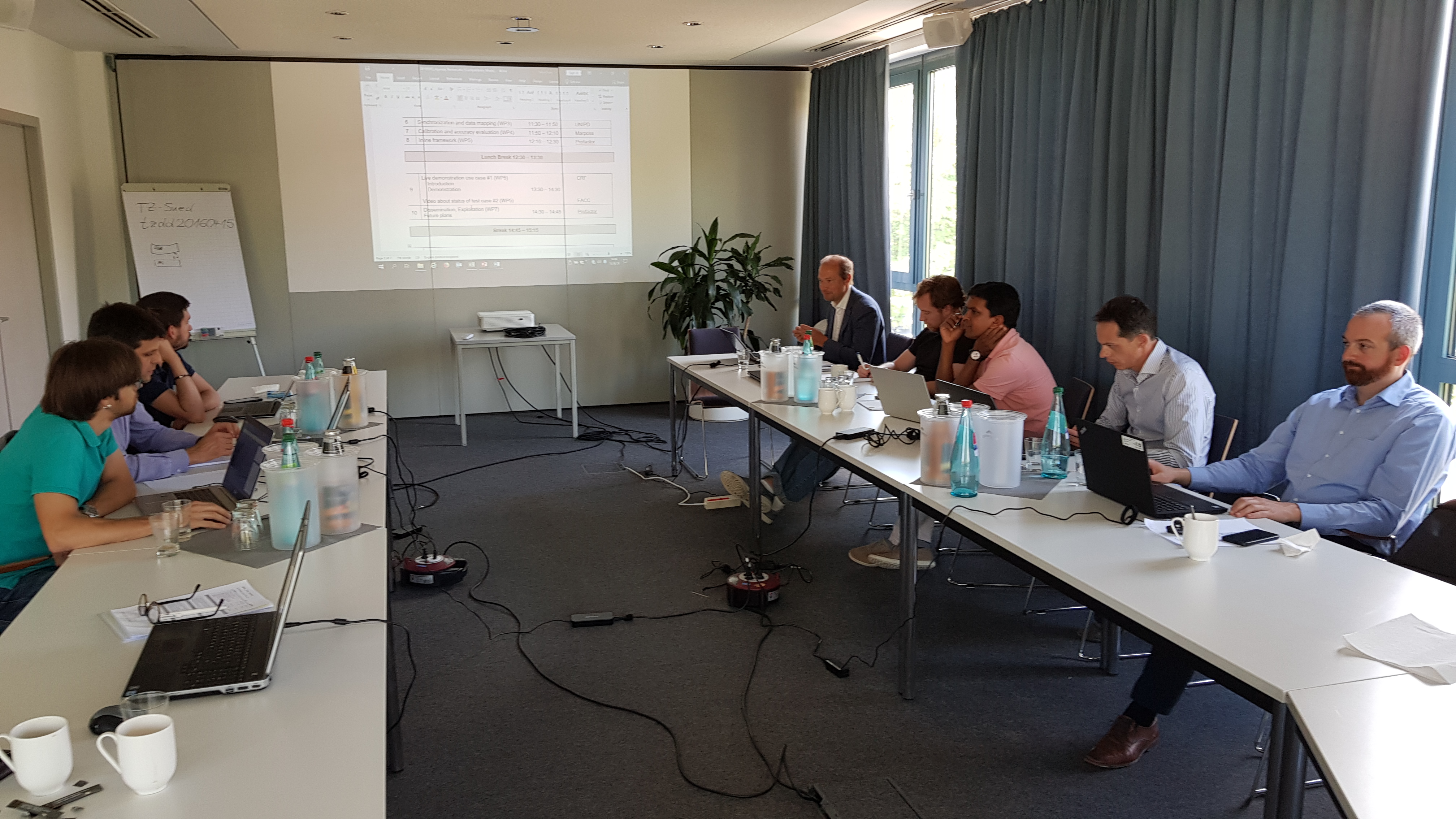 In June 2019 the whole consortium met at project partner Infratec in Dresden. The meeting was dedicated to the preparation of the periodic reporting and the upcoming review meeting. At the technical level the main focus was on the second test case with two synchronized robots carrying an X-ray sensor to inspect a carbon fiber composite part. The demonstration including this test case is planned for project month 26 (Feb. 2020) and will show key developments of the project, such as the automatic data mapping, where the images acquired by the X-ray sensor are mapped seamlessly to the 3D surface of the part. Major tasks related to automatic replanning of previously planned inspection paths are starting soon and the plans for the development of these features were discussed in detail. During the meeting Infratec offered a tour through their facilities, where partners could take a look at the different thermography systems built by Infratec and at their advanced calibration laboratory for temperature calibration of their thermographic cameras.

Developments are quickly proceeding in several aspects of the project. Path planning and robot program generation modules have been improved to allow a quicker and smoother motion of the robot. This has already been installed and successfully tested on the demonstration setup at CRF. Furthermore the whole process of calibration has been assessed in great detail, characterizing the single influence factors from hand-eye calibration over robot accuracy to part positioning. All of the these elements build the basis for the accurate mapping of the acquired data onto the 3D model of the parts. First steps have also been taken to integrate the second demonstration, an X-Ray inspection system consisting of two robots that is setup at project partner FACC. Hardware interfaces for robot control and X-Ray image acquisition are currently being implemented and tested. 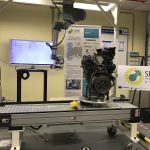 In the months prior to this meeting significant effort was spent on setting up a complete demonstration at CRF in Orbassano (Torino). The task of the robot is to inspect a number of critical features on the engine, such as missing or misplaced components. As an additional challenge the engine was moving on a conveyor belt during the inspection process. This made the path planning somewhat difficult, especially because an automatic adaptation based on the current position of the engine was already integrated. The demonstration was completed successfully and followed by a detailed evaluation to assess the performance relative to the technical goals set for the end of the project. Good progress was made in all aspects and demonstration #1 actually exceeded the plans made for this stage of the project. The second day of the general meeting was also spent on discussing initial plans for the exploitation of the project results and to obtain a more accurate estimation of the exploitation potential. 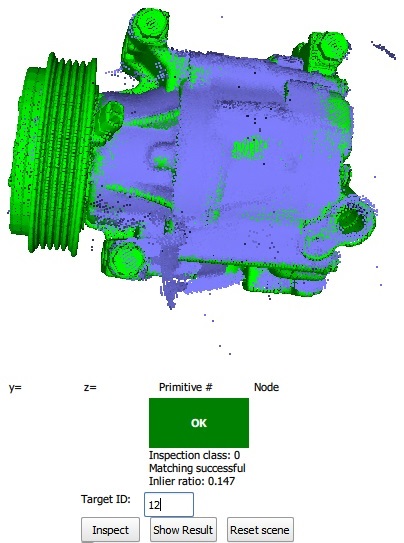 In the first week of December 2018 Profactor, TI+Robotics and Marposs gathered at CRF for a first integration of the SPIRIT developments. This initial test dealt with the task of automating the inspection of an assembled engine on a moving conveyor belt. The integration was targeted on testing the single components such as the 3D sensor, the calibration, the synchronization of robot motion and data acquisition and the offline motion planning. The setup was well prepared by CRF and only a few issues related to the interfaces between the partners had to be resolved before first tests could be done. The results indicated that there is good progress in all aspects. Improvements are still needed in relation to hand-eye calibration and at the interface to the conveyor’s control unit (to avoid collisions in case of a system failure). For hand-eye calibration the new algorithm just developed by University of Padova will be integrated and tested in the CRF facility. Overall the developments are in a good state and the project is well on track for the first demonstration that is scheduled for end of February 2019.

24th of October 2018. SPIRIT Inspection Technologies.
The SPIRIT project at a generic solution for a wide range of image-based inspection technologies. After a detailed investigation of the various test cases considered in the project first test have been made. All the technologies are assessed with a particular focus on their use in conjunction with robots and continuous scanning. 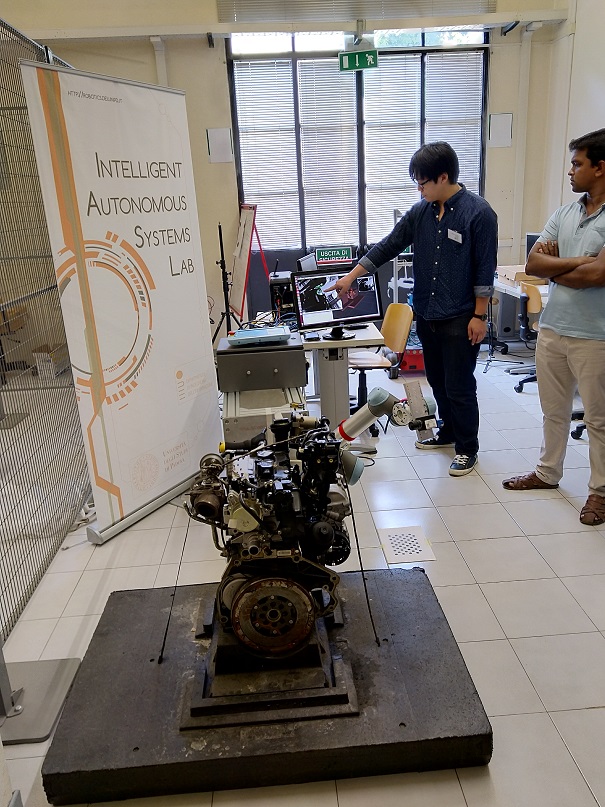 Right after summer vacation the consortium met in Padova where the general meeting was hosted by partner UNIPD. The meeting was dedicated to finalizing the definition of the use cases that are being investigated in the project with the goal of deducing a generally applicable software framework. The modelling of the inspection processes and the collection of CAD data of test parts and workcells has made significant progress. Tests with different inspection technologies have been made to confirm the suitability of the technologies for the single test cases. At the end of the meeting a demonstration was made by UNIPD to show the recent process in terms of hand-eye calibration and temporal synchronisation of robot motion and image acquisition. 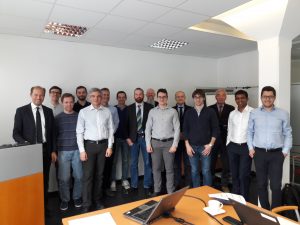 The SPIRIT project had its first meeting at Profactor in Steyr. At freezing temperatures below -10° the whole consortium met to discuss the first steps in the project. A detailed presentation of the various test cases and their challenges was followed by a planning process that covered the next 6 to 9 months. All partners provided substantial background in their fields and – due to past collaborations – a smooth start of the project could be achieved. Already at this stage the main interfaces could be clarified and a common understanding of the main goals and the next steps was achieved. 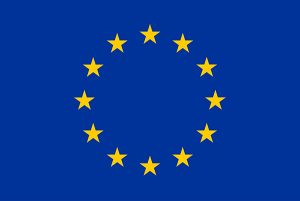 This project has received funding from the European Union’s Horizon 2020 research and innovation programme under grant agreement No 779431.